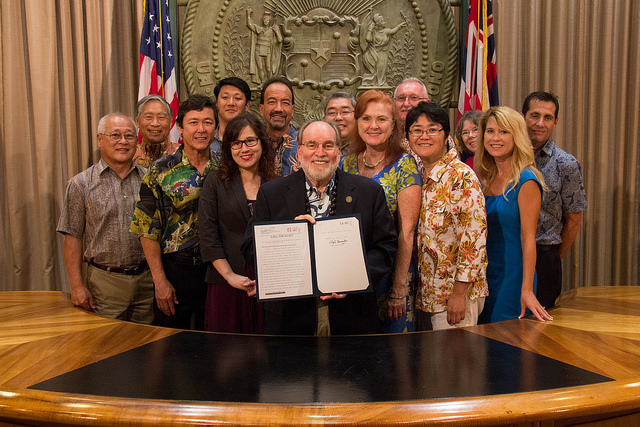 The Hawaii legislature passed SB2542/CD1 to increase funds allocated from the State’s conveyance tax to the Rental Housing Trust Fund from 30% to 50% starting July 1, 2014.  Estimates are that this will generate more than $33 million for the Fund in FY2015.  The legislature also made a $5 million allocation to the Rental Housing Trust Fund through the Supplemental Appropriations Act of 2014 from general obligation bond funds. In 2006, the Legislature raised the allocation to 50%, but they reduced it back to 30% during the economic recession.  This victory restores the funding.

Advocates won by employing several strategies which included increasing collaboration among organizations committed to winning, including PHOCUSED (a health and human services advocacy coalition), the Hawaii Catholic Conference and the Catholic Diocese’s Office of Social Ministry.  Articles were published in the Catholic Herald and calls to action in weekly e-news—focusing on the prioritized bills so supporters would not be overwhelmed.  The focus on greater collaboration extended across the islands to build state-wide support.  Advocates met with key legislators, especially Committee Chairs, to educate them on the need for more affordable rental housing and to get feedback on the effectiveness of the strategies advocates were employing.  Advocates increased their reach to supporters through an on-line petition for support and an organizational sign-on letter of support.

Trisha Kajimura, Social Policy Director of Catholic Charities Hawaii shares, “We are very grateful for the legislature’s support for developing more affordable rental housing. Truly affordable housing for those at 60% or less of area median income is critical to ending homelessness.  We will continue to work with the community, state, and counties to reach our goal of having every person housed with dignity.”

The Rental Housing Trust Fund provides low interest loans or grants to owners and developers of affordable housing, including pre-development, construction, acquisition, preservation, and substantial rehabilitation of rental housing.  Eligible applicants include nonprofit and for-profit corporations, limited liability companies, partnerships, and government agencies. Five percent of the housing supported through the Fund must benefit households earning no more than 30% of the area median income. The Fund is administered by the Hawaii Housing Finance and Development Corporation.

State Senator Suzanne Chun Oakland (D, Kalihi-Liliha), a strong supporter for the Rental Housing Trust Fund, initially asked for $100 million in general obligation bonds for the rental housing trust fund, which advocates have confirmed is what is needed. After the previous legislative session, Senator Oakland convened an informal task force to figure out the most effective ways to address the lack of low-income housing throughout the state.  Kevin Carney of EAH Housing responded, “The Rental Housing Trust Fund is a resource that we depend on a lot.  It’s a very critical part of the puzzle for doing an affordable rental housing deal.”   Senator Oakland became convinced of the Fund’s importance after spending years trying to tackle homelessness.  “We have to do something more.  We can’t just be having services for homeless people because we don’t have the housing stock.”  She added that about 40% of Hawaii’s homeless population is made up of working people who can’t affordable state’s high cost of housing.

NEXT Housing for All Wins Increased Funding for the Housing Production Trust Fund in Washington, D.C.