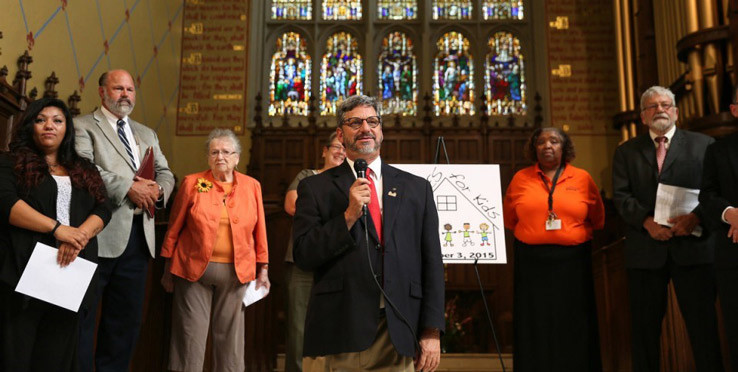 On November 3, 2015, voters in Kalamazoo County, Michigan passed a .1 millage that will provide an estimated $800,000 annually for six years to the Local Housing Assistance Fund (LHAF). The millage revenue will provide housing vouchers and case management to families with children enrolled in Kalamazoo County schools who are at risk of or currently experiencing homeless. The revenue from the millage will help at least 600 families over the course of six years, primarily with rent assistance. The millage passed with a vote of 18,971 in favor and 14,639 against, passing in every precinct of the county’s two largest cities, Kalamazoo and Portage. Under the millage, a homeowner with a property valued at $117,000, the average house value in the county, would pay $5.85 a year.

The LHAF is administered by Kalamazoo County Public Housing Commission.  Since receiving initial appropriation from the City of Kalamazoo in 2004, the LHAF has received more than $2.75 million in allocations from the Cities of Kalamazoo and Portage, Kalamazoo County, the State of Michigan and private contributors. The LHAF has provided a place to call home for hundreds of Kalamazoo families and individuals.  LHAF monies have provided short and long term rental subsidies and have supported homeless prevention programs such as rapid re-housing, eviction diversion and mortgage foreclosure avoidance assistance.  The LHAF funds have also been used for the acquisition and rehabilitation of affordable rental housing properties.

With funding from the millage, the LHAF will fund nonprofit organizations that provide affordable housing and homeless prevention services through an RFP process to assist families with children enrolled in public, private or parochial schools in the County who are experiencing or at risk of being homeless.  The goal is increased housing stability. To be eligible for assistance, families must have an income that does not exceed 60% of the area median income (AMI). The 2015 Kalamazoo County 60% AMI for a family of four was $36,120.  The average length of housing assistance for each family will not exceed one year. The Public Housing Commission will develop and monitor outcome measures for awarded contracts, and report regularly on progress to Kalamazoo County. The LHAF millage initiative will seek to collaborate and cooperate with existing housing assistance activities, leveraging and augmenting resources to increase the opportunity for further system-wide, positive housing outcomes. In addition to utilizing the existing network of nonprofit housing and homeless service providers, county landlords will be an important partner. Landlords who agree to accept tenants through this program and keep their rents consistent with affordability standards will receive the subsidy portion of the rent on a monthly basis on occupied units.

Leading the victorious millage campaign was the Vote Yes for Kids coalition, a group of organizations and individuals that have been collectively advocating for dedicated funding for the LHAF since it was established in 2003. The core of the coalition includes Michigan United and the Interfaith Strategy for Advocacy and Action in the Community (ISAAC), both faith based community organizing groups, and Open Doors Kalamazoo, which provides shelter and housing services, as well as members of the County Commission and a state representative.  In 2010, Michigan United, ISSAC, Open Doors Kalamazoo and others founded the HOMES coalition, which succeeded is urging Kalamazoo County to allocate more than $700,000 from the County general fund between 2010 and 2014.

In early 2015, HOMES learned that a majority of members of County Commission expressed interest in putting a millage on the November ballot in early 2015.  Driving interest on the Commission was the release of data that more than 1200 students enrolled in schools in the County had experienced homelessness in the 2014-15 school year. HOMES launched into action, advocating for a favorable Commission vote on the millage, securing the endorsements of Superintendents of the several key school districts within the county, and from prominent nonprofit housing providers, as well as generating media coverage calling for action to provide housing assistance to families with school children experiencing homelessness.  The strategy of approaching the Superintendents was particularly effective, as several Superintendents provided testimony and other outreach to the County Commission, and remained vocal public supporters throughout the campaign.

Once the support on the Commission became clear, HOMES officially reconfigured to form Vote Yes for Kids and began raising funds for campaign staff and material costs. On July 21, the County Commission voted to place the millage on the ballot.  By mid-August, Vote Yes for Kids hired a campaign manager and hit the ground running. In the next two weeks, the campaign developed a campaign messaging strategy, created the mailer and materials, and trained supporters to be effective spokespeople.  By September, Vote Yes for Kids members were in full sprint mode: Television interviews, church basement meetings, securing endorsements from school boards, local cities and towns, constant fund raising, and a whole bunch of door knocking! The result was a HUGE victory for Kalamazoo families, with 56% of voters supporting the LHAF millage.

“Passing the millage is a statement from Kalamazoo County that investing in the future of kids is a top community value,” said Votes Yes for Kids spokesperson Rick Stravers, executive director of Open Door Kalamazoo. “Having a place to call home doesn’t just mean a bed at night. For a child, a home means a place to do homework, a safe place to play, and dinner at the family table—things we want every child to have so they can flourish in school and life.”

For information of the LHAF millage, contact David Anderson (269) 720-7145 or danderson@kazoocmh.org.

To view the Votes Yes for Kids website, go to http://voteyesforkids.net/.