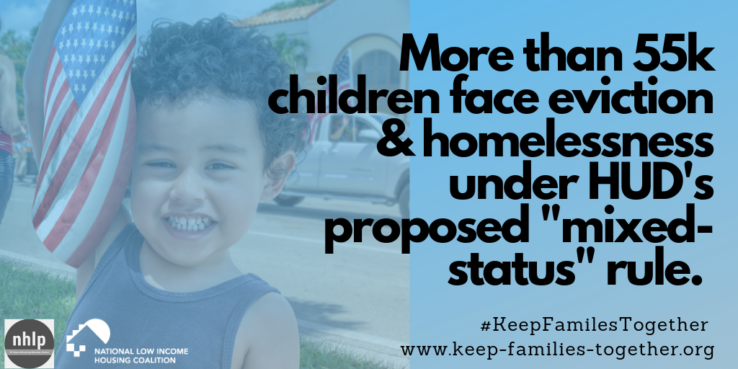 In May, the Trump administration proposed a new HUD rule that attacks immigrant families, threatening 100,000 very low income families with eviction.  The rule prohibits “mixed-status” families from living in public and other subsidized housing, despite the fact that ineligible immigrants are already not allowed to benefit from federal housing subsidies. The rule would result in family separations and evictions, putting tens of thousands of people and children at increased risk of homelessness. To make matters worse, HUD is justifying the rule by falsely scapegoating immigrant families as a cause for long affordable housing waitlists.

TAKE ACTION:  Submit comments to HUD to let the Trump administration know you oppose the proposed rule. Comments are due by July 9.

NLIHC and the National Housing Law Project (NHLP) are leading the effort to oppose this harmful and cruel proposal and have developed advocacy tools for you to use to join in opposition. They have launched a new website, www.Keep-Families-Together.org, with fact sheets and other resources (including talking points and social media images), read the latest news, and submit your own comments directly to HUD. The website will be updated throughout the comment period.