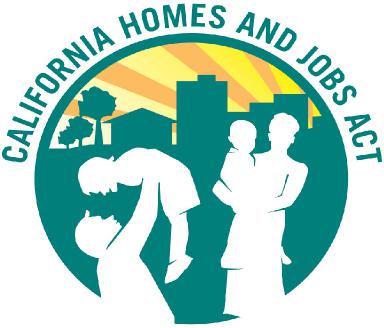 Housing California and the California Housing Consortium are confident that the work of housing advocates on the HOMeS Act in 2012 set the stage for winning a sustainable funding source for affordable homes in 2013. A new bill will be introduced in 2013 that would produce $500 million per year for affordable homes throughout the state by funding the state housing trust fund.

The bill will impose a fee of $75 dollars on document recordings, except for those connected to the transfers subject to the imposition of a documentary transfer tax. Revenues will be placed in the state housing trust fund. Funds can be used to support the development, acquisition, rehabilitation, and preservation of housing affordable to low and moderate income households, including, but not limited to: emergency shelters; transitional and permanent rental housing, along with necessary service and operating subsidies; foreclosure mitigation; and homeownership opportunities. 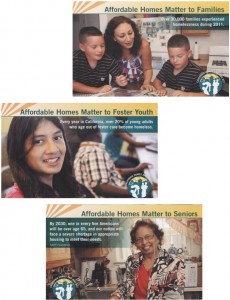 Postcards to support the California Homes and Jobs Act

The California Homes and Jobs Act campaign was launched in September 2012 building on convincing themes that everyone in California needs a safe place to call home. California’s housing crisis means U.S. military veterans, former foster youth, families with children, persons with disabilities, and seniors on fixed incomes often go without a stable place to live, or risk losing the homes they have.

The campaign explains that the California Homes and Jobs Act will enable California to begin building again. It will:

Shamus Roller of Housing California underscores how critical statewide advocacy is in winning this campaign: “Housing California and the California Housing Consortium are excited to build on our momentum from 2012 and run a successful campaign to fund the housing trust fund in 2013. The campaign will combine strong advocacy in the Capitol along with media and mobilizing our residents and members in their local communities. California needs a funding source to meet the varied and intense housing needs of the state.”

The campaign website provides an opportunity to endorse the campaign, sign up for email updates, contact legislators, engage in a postcard campaign, and includes a fact sheet, proposed bill language, and other materials. Go to: www.californiahomesandjobsact.org

With state housing bond funds running dry and the complete elimination of re-development’s housing funds, the availability of state funds to attract federal funds and leverage private investment is the lowest it has been in years. Since 2002, state investment through general obligation bonds has built more than 174,000 affordable apartments, for-sale homes and emergency shelter beds.

Campaign materials include a brief on the economic benefits of investing in housing. The entire housing industry in California generates close to $328.5 billion of output; support about 922,000 jobs, and accounts for ten percent of all economic activity in California.

An intensive postcard campaign is being waged from September 17 to November 1 to contact all Assembly members and Senators, including candidates, to express the expectation that they will support the bill when it is introduced early in 2013. The postcard campaign is seen as the beginning of the campaign and a tool to engage thousands of residents. Three postcards have been designed reflecting the housing crisis for foster youth, families, and seniors. Advocates are being encouraged to incorporate the postcards into existing events and to host postcard-signing events, calling on residents of member nonprofit development corporations, to participate. Member corporations are being asked to knock on residents’ doors and setup tables near mailboxes to encourage participation, among other ideas.

The Campaign is also encouraging af­fordable home tours set up particularly for candidates running for office. The website offers a toolkit including infor­mation on what considerations must legally be considered in working with candidates. The toolkit suggests touring three sites (affordable homes) with the third offering an opportunity to host an event with guests, refreshments, and a short program. Each event will include a resident telling their story and a com­munity leader speaking to the group.

Housing California is the voice in the state Capitol for children, seniors, fami­lies, people experiencing homelessness, and everyone who needs a safe, stable affordable place to call home. Since 1988, Housing California has been the go-to organization for decision makers on housing and homeless policy and legislation. The California Housing Consortium is the statewide housing advocacy organization representing the development, building, financial, and public sectors united in a non-partisan effort to advance affordable housing and community development across California. The website is: www.california-homesandjobsact.org/