A busy and productive summer for the Louisville Affordable Housing Trust Fund Board culminated in a meeting with Louisville Mayor Greg Fischer during which the Board identified an increase to an existing insurance premium tax as the preferred source of dedicated funding for the Louisville Affordable Housing Trust Fund (LAHTF). In July the LAHTF received $250,000 from part of the National Mortgage Settlement Funds awarded to the State of Kentucky. The LAHTF Board also met a June deadline to match the Mayor’s $100,000 FY 2011-2012 general fund allocation. The general fund allocation was contingent on raising the match.

Increasing the insurance premium tax has been on the top of possible revenue sources for Louisville housing trust fund advocates. This spring, the housing committee of CLOUT (Citizens of Louisville Organized and United Together) targeted the increase as the most appropriate revenue source for the LAHTF both because it generates sufficient revenue and because the Mayor and Metro Council have the power to act on the increase as part of the FY2013-14 budget, a process that culminates in March 2013.

Metro Louisville levies a 5% license tax on the amount of premiums written by insurance companies doing business within Metro Louisville. Under state law (KRS 91A.080) Metro Louisville could increase the tax up to 7%. An increase of 1% would generate nearly $10 million annually—meeting the annual goal for dedicated public revenue established by advocates for the LAHTF.

Currently housing advocates with CLOUT’s sister organization within the DART Network, BUILD, are working with the Lexington City Council to secure an increase to the insurance premium for the Lexington Affordable Housing Trust Fund. Advocates from both CLOUT and BUILD point to Owensboro, Kentucky, a city that opted to raise its insurance premium tax by 3% in the height of the recession—a move widely credited with generating significant local economic activity and spurring job growth.

“Investing in the Affordable Housing Trust Fund with an increase to the insurance premium is absolutely the right move for Louisville,” says Chris Kolb, a leader with CLOUT, “Not only would the investment allow us to house Louisville families, seniors and veterans, but the Affordable Housing Trust Fund is also a job creator. We need the Metro Council to step up and take action now.”

CLOUT renewed its efforts to build public pressure for the Metro Council to take action on the LAHTF in winter 2012, that included a strategic messaging training for CLOUT leaders. In March, CLOUT launched a media advocacy campaign generating significant coverage in the print and television media. Securing dedicated funding for the LAHTF was also a focus of CLOUT’s annual Nehemiah Assembly in April, attended by 1,600 CLOUT members. In June, CLOUT’s annual outreach to business leaders in Metro Louisville included a request that they write letters to Mayor and Council President King, urging them to secure funding for the LAHTF. 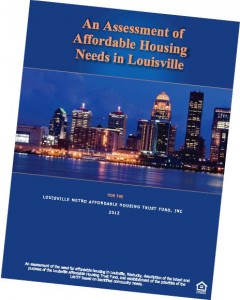 An income of $58,752 for a family of four is required for Basic Economic Security in Louisville.

The LAHTF Board is also ramping up its capacity to advocate for the dedicated revenue source. Though the fund was established in 2006, the LAHTF was not in a position to have staff until hiring director Rachel Hurst in May 2012. Hurst was a leader in the Open the Door campaign, bringing with her a wealth of experience and relationships. With Hurst at the helm, the LAHTF Board is beginning a series of visits with members of the Metro Council, as well as exploring ways to reinvigorate the Open the Door campaign.

“The timing is urgent because the Metro Council and Mayor Fischer must act by March 2013, the upcoming fiscal year budget deliberations, for the LAHTF to begin to create affordable housing projects before 2014,” said Hurst. “While securing $250,000 in National Mortgage Settlement funds and $100,000 in matching funds was a great step towards our goal of a larger, more flexible housing fund, Louisville must commit a lot more resources if we are serious about solving the housing crisis facing our hardworking families.”

The National Mortgage Settlement, approved on April 4, 2012, is the result of a state-federal agreement settling charges that the five largest loan servicers (Ally/GMAC, Bank of America, Citi, JPMorgan Chase, and Wells Fargo) engaged in improper servicing and foreclosure activities. The Mayor worked with Kentucky’s Attorney General to secure the $250,000 for the LAHTF from the settlement funds. Louisville received an additional $2.75 million in settlement funds for abandoned and foreclosed properties. Kentucky’s total settlement award was $19.2 million. Mayor Fischer held a joint press conference with the LAHTF Board to announce the National Mortgage Settlement.

The Louisville Affordable Housing Trust Fund was established in 2006 by the Metro Council after a sustained advocacy effort led by CLOUT, the Metropolitan Housing Coalition, the Coalition for the Homeless, and other members of the Open the Door coalition. The Metro Council established a goal that the Fund receive $10 million in annual revenue in order to be sufficiently operational. Aside from a $1 million award in windfall tax revenue in 2006, the Mayor’s matching $100,000 and the $250,000 in National Mortgage Settlement revenue are the only funds allocated to the LAHTF to date.