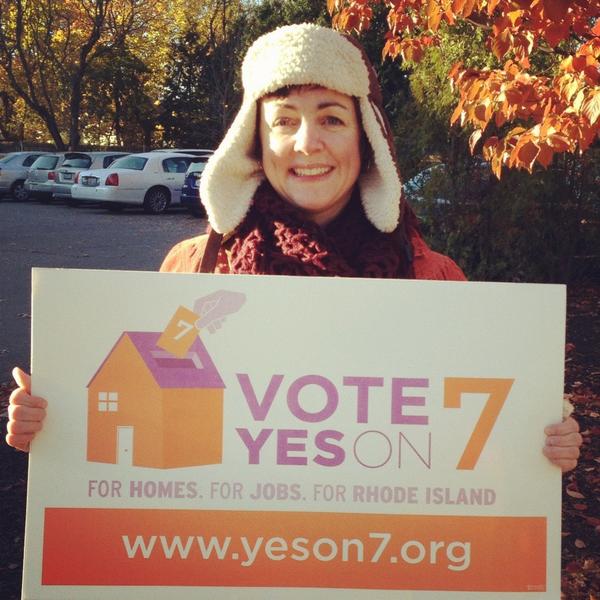 Rhode Island housing and homeless advocates are leading a broad coalition of individuals, organizations, and community leaders in support of Question 7 which would approve new bonds to finance the construction of long-term affordable homes for Rhode Islanders struggling to make ends meet. If passed, the bond will provide $25 million to develop and rehabilitate affordable housing.

“Rhode Island is very unaffordable for renters. You would think with the recession that rents would drop, but they have not.” Chris Hannifan, executive director of Housing Network of Rhode Island. “This housing bond is an essential tool for providing rental housing that is actually affordable to our working families, to our seniors and others the market has left behind.”

With a campaign slogan “For homes. For jobs. For Rhode Island” the Yes On 7 coalition has framed the bond as a solution to the state’s housing and homeless crisis, as a job creator that can put people to work in the recessed economy, and as a proactive investment that will make Rhode Island more competitive economically. Like many states hit by the recession, Rhode Island has seen a spike in family homelessness, as the state has 11% unemployment with a sizable number of people also under employed. Yes on 7 has clearly identified itself as a primary tool for addressing the housing crisis and preventing homelessness.

The campaign is also emphasizing the ability of the bond to leverage other funds and to create jobs in construction and other parts of the economy, highlighting the sterling record of Rhode Island’s 2006 Housing Bond. Yes on 7 projects that the $25 million bond will leverage $150 million from other public and private sources generating more than 600 affordable homes and supporting hundreds of construction jobs over the next few years.

If passed, the $25 million in bond funding will be allocated over two years. The Housing Resources Commission (HRC) will make funding awards. The HRC is a 27-member housing policy-making board that includes representatives from a wide range of public, philanthropic and private sector housing and business organizations. The HRC sets program priorities, solicits applications and makes decisions through a competitive and transparent process. The funds will be administered by the Department of Administration with technical assistance provided by Rhode Island Housing.

Rhode Island voters approved a $50 million housing bond in 2006, which funded the development and rehabilitation of approximately 1,300 homes. The economic impact of the 2006 bond has been well documented. The investment supported more than 6,100 jobs in Rhode Island, including 3,000 in the construction sector, generating $300 million in wages and nearly $800 million in total economic activity. From 2007 through 2010, the housing bond financed developments accounting for more than half of the total cost of residential construction permitted in Rhode Island. Better still, 98% of the contractors responsible for constructing the homes financed with the bond were Rhode Island based companies.

In early September, Yes on 7 kicked off their campaign with a rally at the Blackstone Valley Gateways affordable housing development that drew more than 200 people. Rhode Island Treasurer Gina Raimondo gave an impassioned address that hit on all three of the campaign themes: Yes on 7 provides needed housing, will create new jobs, and proactively invest in Rhode Island’s future. Citing her experience as a board member with Crossroads, a homeless services organization, Treasurer Raimondo noted that people living in shelters “are largely working families and children. It’s time for them to have a home to live in, and that is what this bond issuance is about.”

The Yes on 7 campaign is focused on mobilizing the housing and homeless advocacy community to tap into contacts and supporters across the state. Advocates are utilizing their email networks and mail lists, as well as distributing lawn signs. The campaign team is also running radio and television advertisements promoting Yes on 7. Supporting the field strategy, Yes on 7 has an easy to use website (yeson7.org) with basic information about the bond and its uses, housing need in Rhode Island, information on the economic impact of the 2006 housing bond, stories of people who have benefited from an affordable home, media coverage of the campaign and action steps to support and promote the campaign. The web-site is available in English and Spanish, and is integrated with Yes on 7’s Face-book, Twitter and YouTube sites.

From the start of the campaign, Yes on 7 has generated positive media coverage, including earning the editorial endorsement of the Providence Journal, which cited the positive economic impact of the housing bond Rhode Island voters passed in 2006 as a primary generator of construction jobs in the state during the recession.