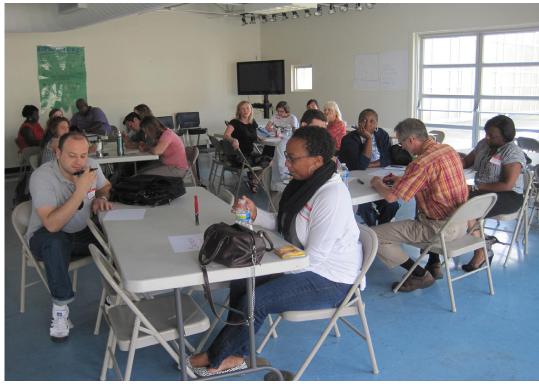 The Louisiana Housing Alliance (LHA) completed a successful statewide listening tour with meetings in nine cities that drew 122 participants representing more than 100 organizations in September. The purpose of the tour was to provide regional forums convening local advocates and community leaders and providing an opportunity to identify local housing issues, discuss and prioritize goals for state housing policy advocacy, and build support for securing revenue for the Louisiana Housing Trust Fund. Of the 122 participants, more than 50 signed up to participate in workgroups related to the Louisiana Housing Trust Fund.

“We are excited to see how participation continues to grow, and with nearly half of those who attended volunteering to help drive our Trust Fund campaign, we’re well on our way to building a truly engaged coalition ready to move LHA’s agenda forward,” said Marla Newman, Executive Director of the Louisiana Housing Alliance.

Beginning on September 5 and concluding on September 24, the tour made stops in Monroe, Shreveport, Lafayette, Covington, Baton Rouge, Alexandria, Houma, New Orleans, and Lake Charles. The highlights of the tour included a strong, enthusiastic turnout in Monroe, the inspiring testimonial of a homeless advocate on what home means to her in Alexandria, and a state representative stepping forward with an offer to introduce legislation to fund the Housing Trust Fund in Baton Rouge.

Adding to the impact of the tour, LHA used social media to broadcast the tour, sharing stories, photos, materials and media coverage from each meeting. The blog also had an interactive map showing tour locations and dates and allowed for online registry. 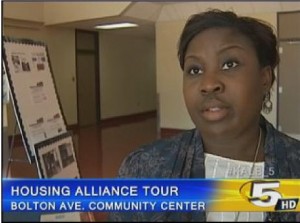 With a two hour agenda structured both to gather information and input from participants, and to educate and inform them about the Louisiana Housing Trust Fund and the need to secure dedicated revenue, the meetings were action packed. One challenge LHA staff identified was that many of the potential supporters of the Louisiana Housing Trust Fund were not familiar with the fund’s impact when it had money to award.

The Louisiana Housing Trust Fund was created in 2003 and has voluntary income tax check-off as dedicated revenue, which generates very little revenue. In 2007, Governor Kathleen Blanco and the legislature allocated $25 million for the Louisiana Housing Trust Fund with the intention of increasing the availability of housing statewide during the rebuilding efforts after Hurricanes Katrina and Rita, and those funds have long since been invested.

Rather than quoting statistics about units produced, the LHA presentation used photos of completed housing projects from around the state high-lighting the importance of home. The presentation also explained the ability of the state housing trust fund to leverage other funds and create jobs. Each meeting concluded with participants ranking policy priorities and identifying technical assistance needs.

“Engaging communities around Louisiana through the Listening Tour each year keeps the Louisiana Housing Alliance on the heartbeat of housing issues in the state. Funding for housing, connecting housing and transportation, and the reuse of vacant properties were all top issues around the state,” said Nathan Cataline, LHA’s Community Engagement Coordinator.

The strong participant interest in the Housing Trust Fund revenue work-groups was a very positive outcome of the tour. The workgroups include an advisory committee to look at the current law, regulations and application process; an organizing committee focused on building local support across the state; and a communications committee aimed at executing LHA’s strategic communications initiative.

In order to conduct a campaign capable of securing new revenue for the trust fund, LHA has determined that they need to develop a more powerful, unified coalition with actively engaged advocates from around the state, and the work groups are great vehicle for engagement.

Another positive outcome is the public support from Representative Sam Jones, who pledged his intent to introduce a revenue bill for the Trust Fund. “The willingness of Rep. Jones to shepherd a bill of this magnitude through Louisiana’s legislature represents the kind of leadership we thought might take years to cultivate. Having the Representative step up like he did is tremendous,” said Newman.

In an effort to build a stronger statewide voice supporting affordable housing, LHA has been conducting listening tours annually since 2008. The Louisiana Housing Alliance believes that fostering discussions among housing advocates who represent the different regions of Louisiana is critical to increasing the strength and potential of that voice. In addition to using social media to broadcast the tour, LHA also utilized its blog to share the results of the policy priority survey conducted during the tour; click here to check it out.