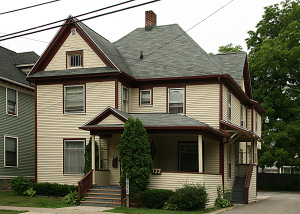 The HOMES Coalition celebrated an important victory in October, when the Kalamazoo County (Michigan) Commission voted 9-2 to approve a FY2014 budget that includes a $250,000 line item for the Local Housing Assistance Fund (LHAF). The Commission was poised to authorize $125,000 in the budget but doubled the amount due to the leadership of several Commissioners and the advocacy efforts of Michigan United and ISAAC, both members of HOMES. Inclusion as a line item is significant because it allows the Public Housing Commission (PHC), the agency that administers the LHAF, to request funding at that level for future years with a strong expectation that it will be included in the final budget. The County released $125,000 to the LHAF at the start of the fiscal year, with the remaining $125,000 scheduled for a March release, dependent on the PHC’s documentation of $125,000 in matching funds.

The LHAF is a proven tool for preventing and reducing the number of people experiencing homelessness in Kalamazoo County.  Since 2006, the LHAF has provided a place to call home for hundreds of Kalamazoo families and individuals.  LHAF monies have provided short and long term rental subsidies and have supported homeless prevention programs such as rapid re-housing, eviction diversion and mortgage foreclosure avoidance assistance.  The LHAF funds have also be used for the acquisition and rehabilitation of affordable rental housing properties.  Taking into account the FY2014 allocation, Kalamazoo County has contributed $1.25 million to the LHAF since 2006.

As County budget deliberations unfolded in the late summer, the LHAF champions on the Commission, Julie Rogers, Phil Stinchcomb, and John Taylor, realized that there was an opportunity to secure more for the LHAF than the initially target $125,000 line item. Commissioner Rogers reached out to HOMES with a simple, compelling message: “We have a real chance to win more!” As the three commissioners began to build bi-partisan support within the Commission, Michigan United and ISAAC mobilized their memberships to activate constituent support in key Commission districts.  Leaders from Michigan United conducted phone banks that reached 70 members living in key districts to encourage and prepare them to call their Commissioner and make the case increasing the LHAF line item to $250,000.  In districts where the Commissioner was a likely supporter, the constituents were prepared to deliver thank yous and words of encouragement.  In districts where the Commissioner was undecided, the constituent script focused on the need for the LHAF and its track record of success.  In all cases, constituents were prepared to tell personal stories of why home matters to people of Kalamazoo County. The phone bank generated nearly 30 calls to County Commissioners. The result of the combined advocacy of the champions on the County Commission and the work of Michigan United and ISAAC in the field was a resounding 9-2 vote to approve the budget.

“This victory is significant because we had the public leadership willing to push to secure the funding, and the grass roots support mobilized and engaged with their Commissioners saying ‘this matters to the people of Kalamazoo County,” said Meredith Loomis Quinlan, Housing and Economic Justice Organizer with Michigan United.

Funding for the LHAF was first secured in 2004, when the City of Kalamazoo dedicated $250,000 to the fund. Including the allocation in the 2014 County budget, more than $2.75 million has been invested in the LHAF by the Cities of Kalamazoo and Portage, Kalamazoo County, the State of Michigan and private contributors.

The HOMES Coalition (Housing Opportunity Makes Economic Sense) came together in Fall 2010.  The ten organizations that remain active today are:

HOMES formed with the goal of securing a permanent funding source for the LHAF.  After exploring every possible source of revenue, the best route seemed to be passing a millage to increase local property taxes.  For the people in Kalamazoo County to vote on a millage, the Commission needed to vote to put the millage on the ballot.  In February 2012, the Kalamazoo County Commission voted against placing the LHAF millage on the November 2012 ballot, despite public polling that indicated overwhelming support for the millage. While advancing LHAF funding from Kalamazoo County to a budget line item is not necessarily a permanent funding source, the County’s commitment demonstrates the tenacity and dedication of the HOMES coalition and fellow advocates to make it a public priority to invest in solutions to address homelessness.

Even with the budget line-item victory, HOMES remains vigilant for opportunities to bring an LHAF millage to the ballot.  That opportunity may be as early as 2015 as four Kalamazoo County Commissioners have announced their candidacy for state office.