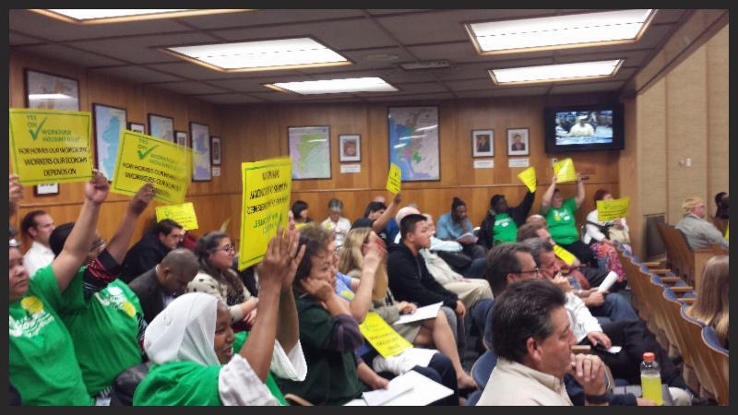 EDITORS NOTE: On March 5, 2014, the San Diego City Council voted to repeal the ordinance reported in this article. The San Diego Housing Federation applauds the City Council’s vocal support of the Workforce Housing Offset and their clear commitment to not allow this measure to fall by the wayside by holding the business community accountable to meaningful collaboration on this issue.

The San Diego Housing Federation and its partners were victorious in the City Council’s decision to approve the Workforce Housing Offset Ordinance in December 2013, providing an estimated $10 million in additional funding to support affordable housing throughout the City.  More than a decade of advocacy resulted in restoring this commercial developer fee to build the City’s housing trust fund.

San Diego Housing Federation Executive Director, Susan Riggs, released the following statement: “We applaud the leadership of the City Council in taking this historic step to meet the housing needs of the City’s hardworking families.  This local source of funding for affordable housing is especially important in a time when other critical sources have been cut or depleted.”  The San Diego Housing Federation rallied its members, community partners and residents concerned about the availability of affordable housing to support changes proposed by the San Diego Housing Commission.

The San Diego City Council gave preliminary approval on November 4, and again on November 21, with final approval on December 10.  The November 4th hearing involved more than four hours of public comment.  More than 100 residents and community representatives from Environmental Health Coalition, ACCE, City Heights Community Development Corporation, San Diego Organizing Project, Interfaith Committee for Worker Justice, Community HousingWorks, MAAC Project, Center on Policy Initiatives, and labor groups showed their support for affordable housing.  Dozens of speakers took to the podium to share their story and the many reasons why it was time for San Diego to restore its investment in housing affordable to its workforce—the backbone of the City’s economy.

In addition, the San Diego Housing Federation held a community rally and the San Diego media responded providing a strong spotlight on affordable housing for days up to the vote.  Social networks were buzzing with posts and conversations sharing information on the need and benefits of affordable homes in San Diego.  San Diego Housing Federation members and partners alike also supported the effort well in advance of the hearing by writing letters, completing online endorsements and advocating to their respective networks for the proposed changes. The Workforce Housing Offset generates millions of dollars of outside investments in San Diego and helps add jobs to the local economy.  For every dollar spent from the Housing Trust Fund, San Diego sees $30 come back in the form of additional investment.  Each new affordable home created generates 2.1 jobs.

The Workforce Housing Offset Ordinance campaign culminated a long series of steps taken which impacted the collection of the developer fees for the San Diego Housing Trust Fund, including:

Following the Council action, on December 11, the San Diego Regional Chamber of Commerce along with other corporate opponents calling themselves the “Jobs Coalition” announced their intention to file a petition and begin collecting signatures to file a referendum aimed at reversing the Council’s decision. In response to the announcement of the referendum effort, San Diego Housing Federation Executive Director, Susan Riggs, expressed: “We are disappointed by those that work to reverse such an important decision after the City Council already made significant compromises to address their concerns. We believe that the Council’s action represents a fair middle ground on this issue for all stakeholders. The Federation stands committed to our position that the Workforce Housing Offset is integral to ensuring San Diego’s businesses remain viable and that the City can maintain its long-term economic prosperity.”

Since 1990, the San Diego Housing Trust Fund has received more than $51 million in fee revenues and has:

NEXT United for Homes Campaign: Update