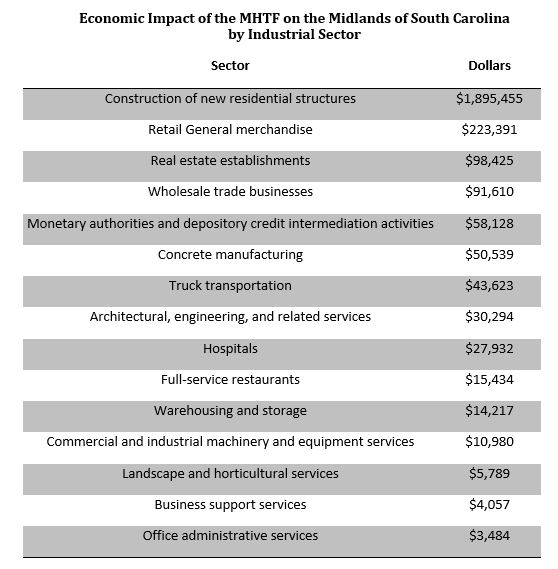 The Midlands Housing Trust Fund has released its economic benefit study, Building a Foundation for Success: The Economic Impact of the Midlands Housing Trust Fund on Central South Carolina, enabling communities across the region to see the full range of benefits from providing quality affordable housing options.  The Midlands Housing Trust Fund has generated an economic impact of $4.8 million throughout the region from investing in affordable homes.  The study was performed by economists at the University of South Carolina’s Darla Moore School of Business.  “The economic benefits of housing cannot be overstated,” said Joseph Von Nessen, research economist and the study’s principal author, “Not only does the housing market represent nearly 15 percent of all economic activity in the United States, but the creation of stable housing environments generates many economic and social benefits.”

The Midlands Housing Trust Fund was created to provide financing, technical assistance, and advocacy for the construction, rehabilitation, and preservation of affordable housing in the Midlands of South Carolina.  The Midlands Housing Trust Fund is one of the minority of housing trust funds across the country incorporated as a 501(c)(3) and operates as a revolving loan fund providing affordable homes for households earning less than 80% of the area median income throughout the seven-county area of central South Carolina:  Calhoun, Fairfield, Kershaw, Lexington, Newberry, Orangeburg, and Richland counties.

The Trust’s five-year goal is to secure $2 million or more in loan capital, including funding from dedicated sources from at least two municipalities or counties in its service area.  In two years of activity, the Fund has awarded $642,023 leveraging more than $25 million in funding from other public and private sources to create 198 affordable homes for low and moderate income individuals and families in the region.

According to the report, the annual economic impact of $4.8 million in the Midlands region represents the total value of all goods and services associated—directly or indirectly—with the activities of the Trust Fund. The total estimated increase in annual state tax revenue that arises from the ongoing operations of the Fund is $101,704.  By extension, the construction and rehabilitation projects currently in the planning phases have the potential to generate nearly $1 million in additional revenue for the state of South Carolina over the next five years. This contribution has the potential to increase significantly as the operations of the MHTF expand over time.  In addition, these revenues have created 33 jobs and produced $1.4 million in labor income for Midlands residents.  Additional economic impact results from what is referred to as the move-in effect that occurs when a household moves from one home to another, triggering additional spending on appliances, furnishings, and remodeling.

The economic impact of the Midlands Housing Trust Fund also extends to many industrial sectors. This table from the report highlights the fifteen most impacted sectors and the annual economic activity associated with each.

The report also highlights meaningful qualitative economic impacts that a region is likely to experience as a result of residents having better access to affordable housing.  The first of these is the impact on regional competiveness. The availability of affordable housing near areas with relatively high demand for labor is an important factor to many employers considering new regions in which to locate.  Available affordable housing can affect a region’s ability to attract and retain a workforce. This, in turn, has implications for the ability to attract companies to that region.

Finally, the report notes the importance of a safe affordable home to families noting that frequents moves create disruption for children linked to educational success, living in substandard housing often increases exposure to environmental hazards, and well-constructed and managed affordable housing can reduce health issues by limiting exposure to allergens, neurotoxins, and other dangers.  And, of course, providing an affordable home enables households to budget for other essentials, including healthcare.

Here’s a story the Fund shares on its website giving meaning to the broad impact of the Midlands Housing Trust Fund: 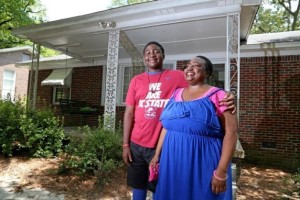 Zelda Benjamin had lived through a decade of instability, illness, family separation and periodic homelessness. After working long hours, she’d come home to a house that wasn’t her own, longing for the independence and confidence she’d had when she had a safe house that was her home. A month ago, she and her son were given that – and a new start. “To me, it’s like I’m starting to dream again, and I’m seeing dreams come true,” the 42-year-old said. Benjamin’s new rental home, recently refurbished and situated in a safe neighborhood near downtown, is a product of the efforts of a developer committed to providing affordable housing and an organization committed to making those ventures financially possible. And it doesn’t break her budget. A collaboration between Affordable Housing Resources and the Midlands Housing Trust Fund put Benjamin and her 13-year-old son, Daniel, in a rental house costing them no more than 30 percent of Benjamin’s income.