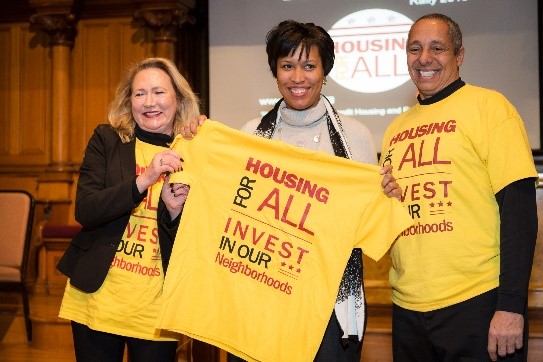 The Coalition for Nonprofit Housing and Economic Development (CHNED) and its Housing For All Campaign celebrated on May 27th when the DC Council passed an historic funding of $100 million for the Housing Production Trust Fund that will make more affordable homes possible in the District.

In this most recent push, the Housing For All Campaign has been ramping up actions since fall 2014.  The November 18th DC Council voted unanimously to support at least $100 million in appropriations for the Housing Production Trust Fund annually, the Housing Production Trust Fund Baseline Funding Amendment Act of 2014.   Since the legislation was  an appropriation, it required further action by the Mayor and Council to be in the DC budget. 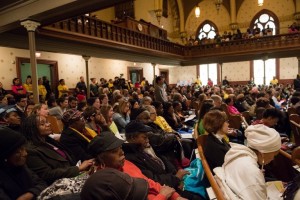 With multiple education event and actions, including activating their residents of affordable housing network, CHNED held a fourth and largest rally on February 13th  with over 700 people packed into Calvary Baptist Church with one message: Housing For All: DC Is Our Home. They were joined by Mayor Muriel Bowser, DC Council Housing and Community Development Committee Chair Anita Bonds, and Councilmember Elissa Silverman.  The high-energy event included stories of residents struggling and succeeding in finding affordable housing, essays by students and adults, and performances by groups and artists connected with affordable housing providers.

Upping the campaign pressure, more than 100 DC organizations and hundreds of individuals signed on to support the Housing Production Trust Fund and made their presence known during Council meetings. The Campaign engaged thousands of residents to compel DC government to invest in the programs that make a full continuum of housing affordable for District residents, particularly for those with the greatest housing need.

While Mayor Bowser indicted that affordable housing is a priority of her administration, it was a fight for CHNED and allies to keep the affordable housing funding at the top of the agenda.  Most recently in early May, there was a move by a council member to move $9 million in dedicated funding out of the housing budget this year.  However, with a strong last minute advocacy push, the funds raised through the Trust Fund’s dedicated tax are directed into the Trust Fund this year.

About the Campaign’s victory Ms. Little stated, “We were successful because the Mayor saw the need for affordable housing. The Mayor and Council saw the hard work of the Housing For All Campaign over the last four years. The Housing For All Campaign focused on our asks and rallied, sent letters, held meetings, made phone calls, tweeted, visited Council offices, invited them to visit us, and went to hearings. We used people’s stories and pictures to show solutions the Mayor and the Council can do to make housing affordable and end homelessness to help families become whole again.”

Stephen Glaude, Executive Director of CHNED, commented on this historic vote, “From Mayor Bowser and her agency directors, to Council Chair Mendelson, Committee on Housing and Community Development Chair Bonds, and all the members of the Council, we are seeing the type of political will and courage the District of Columbia needs to make living and working here possible for all residents. We will continue to work in concert with our leaders to ensure the programs are implemented successfully,”

The Washington DC budget includes housing funding as well as other funding for other affordable home projects as well as funding for programs to help or prevent people from experiencing homelessness.  The following is a breakdown of the numbers:

The funding of the Housing Production Trust Fund and other affordable housing programs will give a boost to an already successful program.  Since 2002, the Housing Production Trust Fund (HPTF) has produced and preserved more than 8,500 affordable homes across every ward in the District. There are over 3,400 more affordable homes in the pipeline with Trust Fund commitments. HPTF is crucial to meet the District’s long-term goals of addressing homelessness through permanent supportive housing for the chronically homeless and providing affordable units for homeless individuals and families.

For more information on the Housing For All Campaign contact Elizabeth Falcon, Director of Housing Advocacy at 202.745.0902 x205 or efalcon(at)cnhed(.)org.