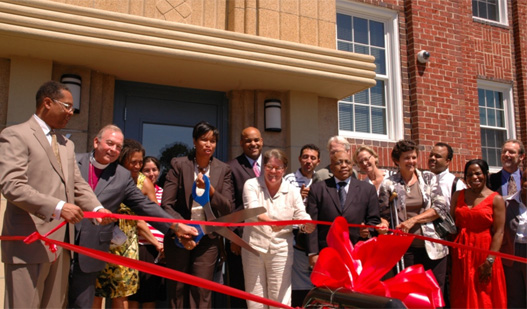 The Coalition for Nonprofit Housing and Economic Development in Washington, D.C. has released a report documenting the comprehensive impact the Housing Production Trust Fund has had on the District’s neighborhoods and its residents.  “A Decade of Progress:  Investing in Lives and Neighborhoods through the Housing Production Trust Fund” was distributed at Coalition’s October 2012 celebration of the accomplishments of the Trust Fund in the decade since passage of the Housing Act of 2002. 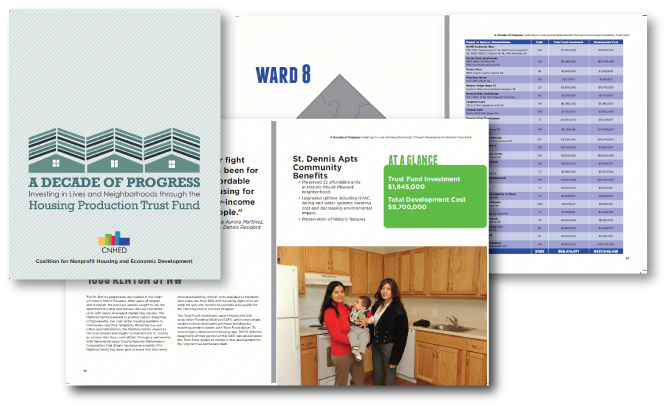 The report also makes a vivid and compelling case for continued funding of the Housing Production Trust Fund which the Housing Act of 2002 primarily funded by a dedicated revenue stream of 15% of the D.C. real estate recordation and transfer tax.  In recent years, the revenues collected from the dedicated tax have declined and while they began to pick up, the District Council cut $18 million from the Fund to pay for the ongoing costs of the Local Rent Supplement Program—a program that had been previously funded from the general fund.  In FY13, $20 million was so transferred.  The Council pledged proceeds from the sale of city owned property to restore most of this cut, and the Mayor and Council also pledged future revenue increases to restore funding.  However, these promises have yet to be implemented.

Shortly after the Trust Fund was created, the Mayor and DC Council considered cutting the dedicated source from 15% to 7.5% of the real estate recordation and transfer tax.  However, advocates successfully convinced the DC Council three times to maintain a full commitment to the Trust Fund. “We learned that we could never let our guard down,” said Bob Pohlman of CNHED.  “It was only through the constant vigilance of advocates and the help of key allies on the DC Council that we preserved full funding for the Trust Fund.” With the loss in revenue which began in 2008, CNHED began the Campaign to Stabilize the Housing Production Trust Fund.  The Housing Production Trust Fund Stabilization Amendment Act of 2008 was approved unanimously by the Council to guarantee minimum levels of funding from the real estate recordation and transfer tax:  $70 million in FY10, $80 million in FY11, and $80 million plus inflation thereafter.  Sadly, the amendment was subject to appropriation and the District has never dedicated the funds necessary to reach the funding floor identified by the amendment.

In its decade of progress, the Housing Production Trust Fund has:

The flexibility of the Housing Production Trust Fund has enabled it to support innovative initiatives within the District.  For example:

Site Acquisition Funding Initiative:  SAFI helps nonprofit housing developers to purchase property for development or rehabilitation of affordable housing. SAFI provided $25 million to a group of select lenders requiring them to match the funds and then offer loans with below market interest rates for qualified nonprofits.  The program enables nonprofit developers to act quickly to secure property, allowing time for the longer-term development process for affordable housing.

Since 2002, the Housing Production Trust Fund has been a key tool for preserving and developing affordable homes throughout the District, impacting families and individuals, renters and home owners, as well as the communities in which they live.